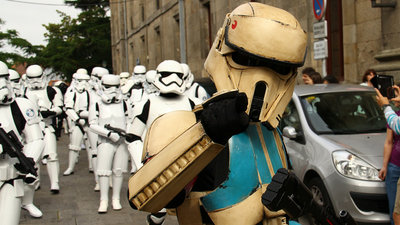 Disney has announced plans to deliver a new work of the "Star Wars" series as a uri of its own streaming service. According to the New York Times, this live-action drama version of "Star Wars" seems to be a terribly-sized work with budget over 1 billion yen per episode.

This work, becoming the first live-action television drama as "Star Wars", served as a director for "Iron Man" and "Iron Man 2", and was responsible for overall production production at "Avengers", "Avengers / Age of Ultron" John Fabeauro is working on it. It is also a work that will be one of the highlights of Disney's planned streaming service, and there is no doubt that power is being pouring in, but the New York Times will spend $ 100 million on its budget (10 episodes About 11.1 billion yen), I estimate it is 10 million dollars per episode (about 1.1 billion yen).

In the past, there is a record that the budget per episode was 13 million dollars (about 1.45 billion yen) in the medical drama "ER" in which all 15 series were deployed.

Game of Thrones season 8 will be the most expensive yet
https://www.telegraph.co.uk/tv/2017/09/27/final-season-game-thrones-will-expensive-yet/

Disney is planning to visualize many works besides "Star Wars" live action drama version in order to enrich the contents of streaming service. " Timmy Failure ", a protagonist's work, is filmed with a budget of 45 million dollars (about 5 billion yen) by Tom McCarthy of "Spotlight Century Scoop" that won the Academy Award Works and Screenplay Award plans. In addition, at least nine movies are to be produced.

As for the "Star Wars" series which is the "main part", the fact that the filming of "Episode 9" following the "Awakening of the Force" and "The Last Jedi" has finally begun is the role of Director of J · J · Abrams It is revealed by John Boyega.


Grateful for @ iranjohnson and special thanks to George Lucas for creating this incredible world and beginning a story of which we are lucky to be a part. #IX pic.twitter.com/FOfnGwVut 5


Carrie Fisher, coached by Abrams, died after shooting the scene of "The Last Jedi" but will also appear in episode 9 using the unused scene at the "Awakening of Force" scene It is revealed.