As the first step of the `` American Space Force '', the Space Command is officially established, the purpose is `` maintaining superiority in space '' 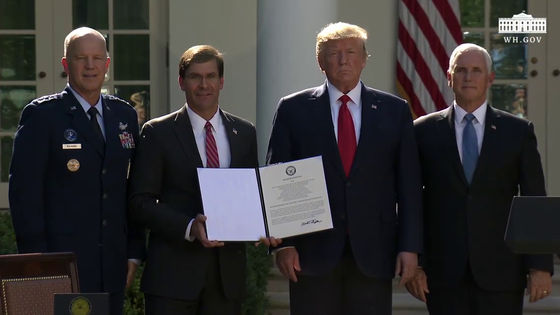 The headquarters was officially established for the “US Space Force”, which has been conceived under the Donald Trump administration and has developed concrete stories.


President Trump Is Reviving US Space Command. Here's What That Is: NPR
https://www.npr.org/2019/08/29/755383671/white-house-hopes-revived-space-command-is-one-giant-leap-toward-proposed-space-

There are six areas by region: `` Northern Army '', `` Central Army '', `` African Army '', `` European Army '', `` Indo-Pacific Army '', `` Southern Army '', and by function `` Special Operations Army '' `` Strategic Army '' `` Transport Army '' Four 'Cyber Army'. In fact, the “space army” existed from 1985 to 2002 in order to integrate and operate space-related units and equipment, but in 2002 it was integrated into a strategic army that operated nuclear weapons and disappeared. The unit itself was left in the Air Force affiliation. Later, in 2017, Republican Rep. Mike Rogers and Democrat Rep. Jim Cooper submitted the 2018 Defense Authority Act, including a proposal to separate the space field from the Air Force to become `` Space Corps ''. In the end, this proposal was deleted.

In 2018, President Trump announced the concept of establishing the “Space Army” as the sixth military type. The Defense Defense Act 2019 includes the re-establishment of the space army under strategic slavery.

The budget is expected to be included in the 2020 Defense Law, and the Trump administration aims to make the space army independent as the 6th army under the air force, so that the Marines make up one army under the army. Become.