How did birds evolve from dinosaurs? Birds with wings that allow them to fly freely in the sky are said to be the descendants of dinosaurs that thrived about 66 million years ago. Quanta Magazine, a science news site, explains how a huge dinosaur evolved into a small, flying bird.

Modern birds, theropoda is said to have evolved from dinosaurs of the two legs to be known as. Some of the theropods include the tyrannosaurus renowned for its representative carnivorous dinosaurs and the small Velociraptors. Most closely related to the birds, theropods generally weigh between 100 pounds (about 45 kg) and 500 pounds (about 226 kg), are larger than most major modern birds, have large noses and large teeth, and have both ears. The time wasn't that big. For example, the small carnivorous dinosaur Velociraptor that lived about 75 to 70 million years ago has a wolf-like skull, and its brain is said to be about the size of a pigeon.

For decades, the only presence of paleontologists to connect dinosaurs and birds was a fossil of a creature called the ' archeopteryx .' Archeopteryx was said to be evidence that it acquired feathers, wings, and flight abilities in the course of evolution of only 10 million years. 'The archeopteryx fossils appeared to be the earliest organisms with the characteristics of modern birds,' said Michael Benton, a paleontologist at the University of Bristol. If a dinosaur suddenly acquires feathers and flight abilities, it is necessary to make large-scale changes in genes that can be called mutations, as well as changes due to adaptation. Paleontologists once advocated the theory of ``Hopeful Monsters,'' which explains that, due to ``mutations,'' organisms weighing 100 kg or more have evolved into sparrow-sized birds. It was

However, fossil dinosaurs discovered in China in the 1990s revealed the existence of feathered dinosaurs. From this, it was shown that the feathers did not appear after they evolved into birds, but they had already acquired feathers at the time of the dinosaurs.

Stephen Brusatte , a paleontologist at the University of Edinburgh in 2019, studied fossils of Coellosaurus that appeared in the middle Jurassic period (170 million to 160 million years ago), and birds were short-lived from dinosaurs. He claimed that it hadn't evolved significantly.

Brusatte said, “Birds did not evolve from Tyrannosaurus overnight, but rather in stages, one step at a time: first biped, then feathers, then the cochlea , and modern times. We now see the complex wings found in many birds, and as a result, the evolution of dinosaurs to birds is seamless and there is no clear delineation between dinosaurs and birds.' It was. In addition to feathers and wings, birds also have a relatively small body size. A study published in 2014 found that dinosaurs were smaller in size 50 million years before the appearance of Archeopteryx. The rapid miniaturization of dinosaurs may have benefited greatly from their small size, but details are not well understood. Mr. Benton speculates that 'trees are excellent food and evacuation destinations, and miniaturization might have been an advantage when moving living areas to trees.' There are many unclear points regarding the evolution of dinosaurs to birds regarding the birth of the beak. The beak of a bird is a bone that is called the anterior maxillary bone that protrudes to the front and develops without forming a nose. Since the beak has a structure that is not found in many vertebrates such as dinosaurs, crocodiles, and ancient birds, the acquisition of the beak has been a big mystery, but reptiles and dinosaurs also have a large protruding maxillary bone. And the development and evolution of the beak show that the bird is a descendant of the dinosaur. 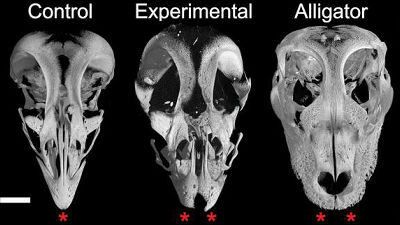