The oxygen generator of NASA's Mars probe 'Perseverance' will soon be operational, what kind of equipment is it? On February 18, 2021 was successfully landed on Mars NASA's 'parser via lance' is a spacecraft to investigate the traces of life on Mars. This perseverance incorporates not only the resources brought in from Earth, but also a mechanism that utilizes locally collected resources, and will soon generate oxygen from the atmosphere of Mars.

Since the gravity applied to an object is proportional to the mass of the object, it is considered that the spacecraft should be as light as possible. In accordance with this idea, NASA will reduce the resources loaded on the spacecraft, so from the resources obtained on the spot called 'In-Situ Resource Utilization (ISRU) ', the resources necessary for the survival of astronauts We are advancing technology to produce building materials for spacecraft and spacecraft.

The Perseverance, which arrived on Mars on February 18, 2021, is equipped with an ISRU called 'MOXIE', a demonstration experiment device that generates oxygen from the atmosphere of Mars in anticipation of 'Mars manned exploration.' The atmosphere on Mars contains 96% carbon dioxide and only 0.13% oxygen, and it is almost impossible to bring in all the oxygen used in long-term missions from the earth because of its distance from the earth. Since local production of oxygen is indispensable for manned Mars exploration, we decided to test the local production of oxygen at MOXIE this time. The following is the actual MOXIE. 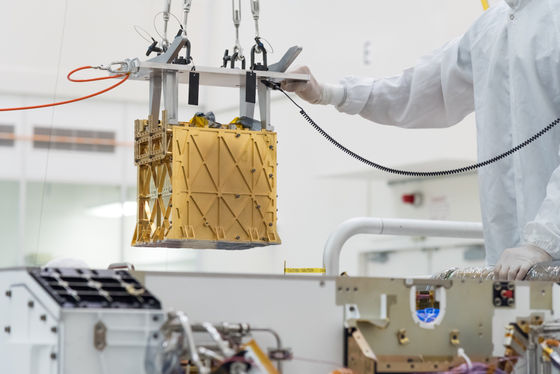 The MOXIE installed in Perseverance this time is a system that heats carbon dioxide recovered from the atmosphere of Mars to nearly 800 ° C and generates oxygen and carbon monoxide by electrolysis to utilize only oxygen. The size is 23.9 x 23.9 x 30.9 cm, and the weight is 17.1 kg, which is the size of a battery class installed in a general automobile. It requires 300W of power to operate, and due to the relationship between the amount of power generated by Perseverance and the power capacity, it can only be started for a few hours per month, and the amount of oxygen produced is 10g per hour. Human survival requires 20 g of oxygen per hour, and the mixed fuel required to return to Earth requires 30,000 to 45,000 kg of oxygen, so it is assumed that total oxygen will be used in long-term missions. If you try to cover with the current MOXIE, you need at least 100 times the size of the current MOXIE.

The MOXIE installed in Perseverance this time is a demonstration experiment, and the purpose is only to 'generate oxygen', which is to release the generated oxygen into the atmosphere of Mars. MOXIE has been confirmed to operate normally a few days after a successful landing, and the first test run is scheduled for April 2021.