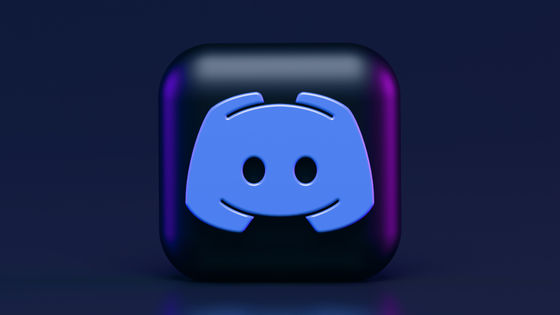 Discord, a group chat app, released its Transparency Report for the second half of 2020 on April 3, 2021. In it, Discord revealed that 2212 servers were removed in half a year because of radical and violent content.

Discord said in a transparency report released on April 3 that '2020 was a year of rapid growth for Discord,' the increase in demand for SNS due to the pandemic of the new coronavirus infection and the game market. He pointed out that the use of Discord has expanded rapidly against the backdrop of the revitalization of Discord. Along with this, the number of problems that occur on Discord has also increased rapidly. 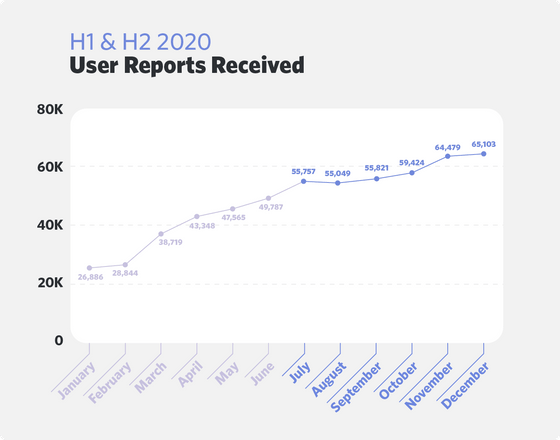 To address this, Discord's Trust and Security team has deleted a number of fraudulent accounts. Below is a breakdown of the non-spam accounts that Discord deleted in late 2020. The number of accounts deleted in 'Exploitative Content' was 129,403, the highest number other than spam, with 33,615 in 'Harassment' and 'Extremist /'. Violent Content) ”was followed by 30,22. In addition, although it is too many and is not included in the graph below, it is said that the number of accounts deleted by spamming has reached 3,264,655 in half a year. 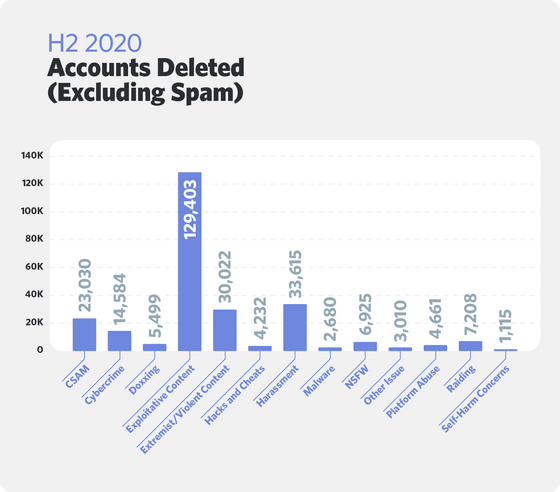 In Discord, each user sets up a room called a 'server' to chat. Discord is also focusing on server countermeasures for malicious content exchanges, and 27,410 servers were shut down in the second half of 2020. The most closed server category is 'Cybercrime' (5875), which is an increase of about 140% compared to the first half of the year. Discord said the increase in reports about cybercrime servers helped this result. 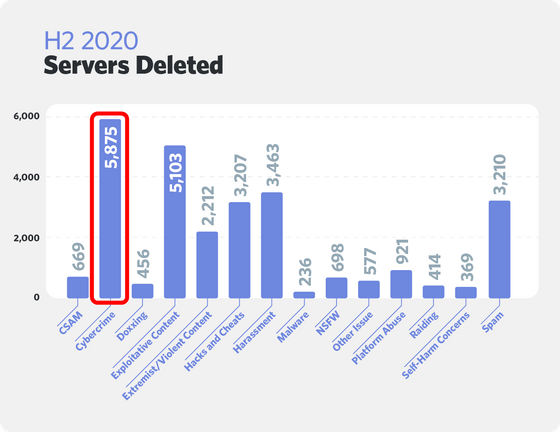 On the other hand, Discord has put a lot of effort into removing servers related to 'radical / violent content'. Of the 2212 servers deleted for this reason, 1504 were the servers that Discord's trust and security team directly detected and deleted. 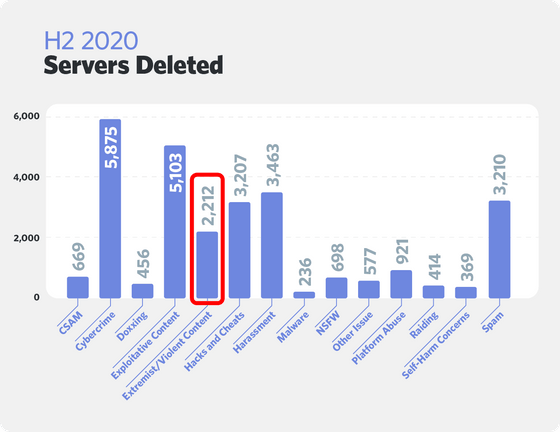 Among the extremist servers that Discord removed were the militaristic ' Boogaloo Boys ' and the conspiracy theorist ' QAnon .' In particular, QAnon has gained a lot of power in the second half of 2020, and 334 servers have been deleted only for QAnon. 'We believe that Discord doesn't have a place for groups organized around hatred, violence, and radical ideology,' Discord said.

'We are serious about this issue,' Discord's report told NPR in foreign media, William Partyn, a research analyst at the nonprofit Data & Society. I think it's part of a public relations campaign to convey that, and at the same time, it's evidence that they're actually making significant progress. '