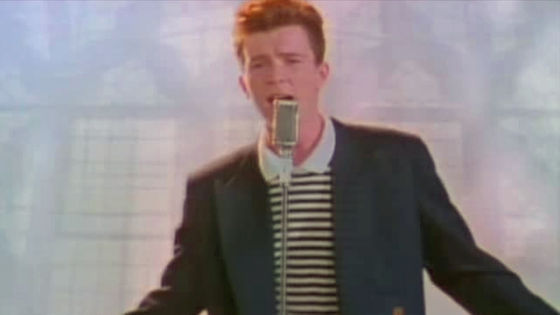 Many people who have been using the Internet for a long time have the experience of saying, 'When I was drawn to a catchy title or thumbnail and clicked on a video, it was a fishing video ...'. It is reported that Rick Astley 's MV ' Never Gonna Give You Up ', which is famous as such a fishing video, has exceeded 1 billion views on YouTube.

Thanks to the Rickroll,'Never Gonna Give You Up' hits 1 billion YouTube plays --The Verge
https://www.theverge.com/2021/7/31/22603429/rick-astley-never-gonna-give-you-up-1-billion-youtube

MV debut song is a British singer Rick Astley has released in 1987, 'Never Gonna Give You Up' is the so-called 'use as a fishing videos Rick roll is famous as a movie of'. You can see what kind of MV it is from the following.


In IT-based news site The Verge is 2021, July 31, 2008, the official video of '' Never Gonna Give You Up 'has surpassed the number of plays billion times on YouTube. If you look only simple playback number of times, reproduction It doesn't reach the 7 billion videos , but this feat demonstrates the mischievous power of Rick Roll. '

According to Billboard's research , 'Never Gonna Give You Up' was played 2.3 million times in April 2021 April Fool's Day alone. However, despite getting so many views, the song was not written and composed by Astley himself, so the royalties he got were only $ 12 (about 1300) when the number of views exceeded 39 million. It was (yen) .

In commemoration of the 1 billion plays of 'Never Gonna Give You Up,' Astry commented, 'Amazing, Crazy, Wonderful!' Also, in a video uploaded to Instagram, he said in his heart, 'The world is a wonderfully beautiful place and I am very lucky.'

Rick Astley has released 2500 limited edition autographed 7-inch records to commemorate the 1 billion plays of 'Never Gonna Give You Up,' which are already sold out.

To celebrate 1 Billion views for Never Gonna Give You Up I'm releasing a limited & numbered 7 ”blue vinyl of the song, 2500 of them and I'll be signing them all! Rick ♥ ️ https://t.co/AOVnRHFN2s
#NGGYU # NGGYU1Billion pic.twitter.com/V473EXct9a