Google announces 'Pixel 6' and 'Pixel 6 Pro', scheduled to be released in the fall of 2021 with its own SoC 'Tensor' Google suddenly announced the new 'Pixel 6 ' and ' Pixel 6 Pro ' of the smartphone 'Pixel' series on August 3, 2021. The Pixel 6 series is equipped with a SoC 'Tensor ' originally developed by Google instead of Qualcomm and a camera with 4x optical zoom, and voice recognition is enhanced by machine learning.

Google Tensor debuts on the new Pixel 6 this fall
https://blog.google/products/pixel/google-tensor-debuts-new-pixel-6-fall/

According to Google, Pixel 6 and Pixel 6 Pro are available in three colors each. The feature of the Pixel 6 series is the exciting camera module, especially the Pixel Pro 6 has a wider upper part of the camera module.

The body color is published on the official page of the Google store, and Pixel 6 and Pixel 6 Pro have 3 colors each. However, the name of the color is unknown. 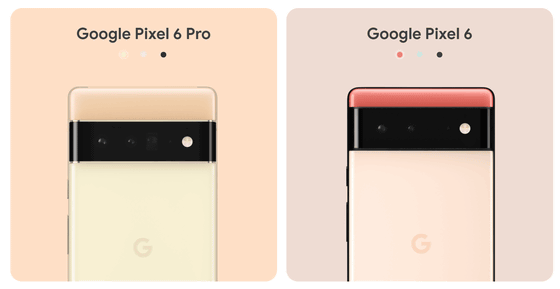 We made a chip! # Pixel6 is powered by our first ever smartphone SoC: meet Google Tensor

Google CEO Sundar Pichai said on Twitter, 'We are very pleased to announce Tensor, Google's new custom chip developed over four years. Tensor has 20 years of computing experience. It will be the biggest innovation in Pixel's history. Tensor will be installed in the Pixel 6 series in the fall of 2021 ', and has released a photo comparing the size of the actual Tensor with a clip.

So excited to share our new custom Google Tensor chip, which has been 4 yrs in the making (???? for scale)! Tensor builds off of our 2 decades of computing experience and it's our biggest innovation in Pixel to date. Will be on Pixel 6 + Pixel 6 Pro in fall. Https://t.co/N95X6gFxLf pic.twitter.com/wHiEJRHJwy

Google has not disclosed the detailed specifications of Tensor, but in the official blog, 'Tensor was designed assuming how users use smartphones and how users will use smartphones in the future. As more features come to work with artificial intelligence (AI) and machine learning, we can use machine learning to bring specific experiences to Pixel users, rather than simply increasing computing resources. It will be. ', Suggesting that the development emphasizes machine learning performance.

'The Tensor design team wanted to further improve the performance of the Pixel, for example, Tensor designed the entire chip and customized it to run computational photography models,' Google said. It has improved the processing performance of the camera and photos. The photos actually taken with Pixel 6 are published on the Pixel team's Instagram account. 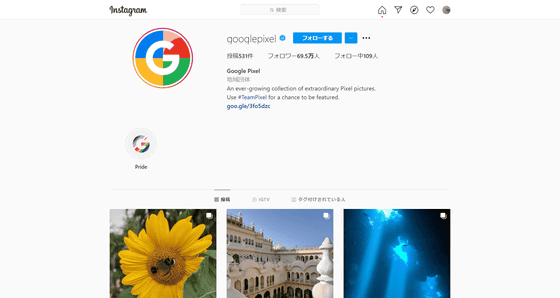 Alright. One last piece of info: # Pixel6 and # Pixel6 Pro, powered by the brand new Google Tensor chip, are coming this fall. ????