How will Adobe's AI 'Adobe Sensei', which creates super-convenient functions such as 'automatically adjust BGM according to the video' and 'change the season and time when the photo was taken', change the role of the creator? 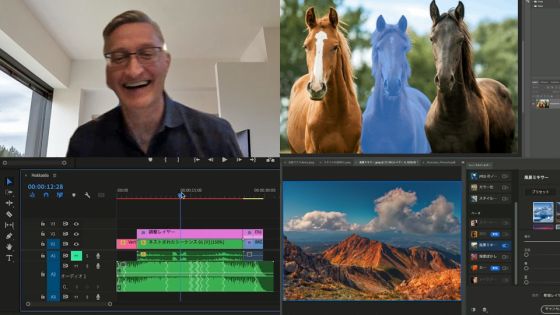 Adobe Sensei'. Now that you have the opportunity to interview Scott Prevost, vice president of engineering at Adobe Sensei, which creates magical features, ask how Adobe Sensei will change the role of future creators. I did.

GIGAZINE (G):
At Adobe MAX in 2021, a new feature of the public beta version of Adobe Premiere Pro , a video editing software, was announced as a remix function that 'trims BGM to the length that fits the movie without any discomfort.' I think this feature is a breakthrough for those who are editing movies. I usually used Premiere Pro and thought 'I wish I had such a function', but on the contrary, why hasn't such a function appeared so far? Scott Prevost (hereinafter Prevost):
It takes several years to actually launch the feature you want to implement. In addition, some of the features under development may or may not actually be included in the product. In addition, if it is to be equipped with functions, it must be provided to users as high-quality functions, as a matter of course. In addition, Adobe Sensei has ethical issues with AI, such as 'testing for AI without any bias'. Therefore, it takes some time from the state of being tested in the laboratory to the actual commercialization. However, even under such circumstances, we have been working toward commercialization as soon as possible. 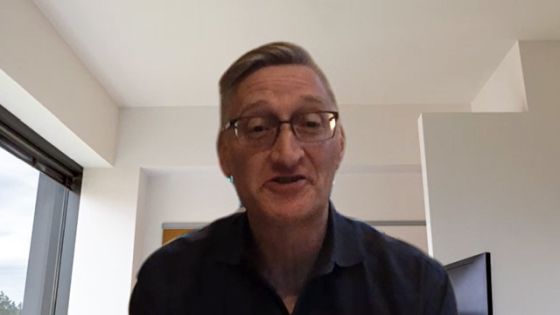 G:
'Adobe Sensei simplifies the hassle of simple tasks,' Scott said in a previous session. On the other hand, I felt that the ' landscape mixer ' that changes the scenery and the 'function that trims the sound' announced at Adobe Max this time are related to the creative part.

You can check the details of the landscape mixer from the following articles.

What is the super-convenient new function 'Object Selection Tool' that Photoshop automatically selects multiple objects and layers them in an instant? --GIGAZINE 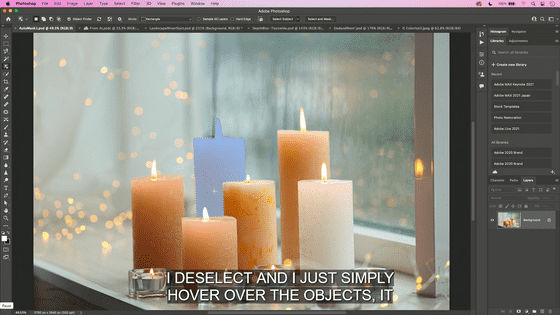 G:
As the number of functions that Adobe Sensei takes on such creative work increases, what is the individuality of each creator, and what is the impact on creativity?

Mr. Prevost:
The features of Adobe Sensei can be described as 'amplifying the creativity of creators.' Creators often have multiple ideas and take different approaches to those ideas, from which the final product comes from. Adobe Sensei automates a variety of tasks, allowing creators to explore each and every idea more broadly. As a result, creativity is amplified and one creator can work like an art director. To add one more point, the enhancement of the search function using Adobe Sensei has made it easier to find various assets required for creative products, so create a work by performing an image search. It's now easier to collect the materials you need.

The awesomeness of image search developed by Adobe was also mentioned in an interview in 2019.

The developer explains the secret of Adobe's AI 'Adobe Sensei' that realizes the tremendousness of 'Is image search so far?' --GIGAZINE G:
By utilizing the features of Adobe Sensei, all creators can act like directors. In other words, does Adobe's vision of future creators mean that each creator can complete a work by himself in the form of a director?

Mr. Prevost:
With the advent of Adobe Sensei, we believe that a wider range of people can be more creative than before. In other words, even people who have not been able to demonstrate their creativity can create beautiful deliverables. It can be said that this is close to the achievement of Adobe's mission of 'creating power for everyone.' For professionals, we believe that Adobe Sensei can provide benefits such as 'improving skills,' 'deepening your quest,' and 'speeding up your work.'

As an example, Adobe Lightroom has added an item called Recommended Presets. This means that your photo will be compared to other photos in the community and Adobe Sensei will recommend the appropriate presets. Recommended presets are one example of how users can learn from the community through Adobe Sensei. This feature allows users to learn 'how others are editing photos' and 'users who want to improve their photography skills' are 'acting as photo professionals'. It is possible to get an opportunity to learn from 'users who are'. Adobe Sensei enables users to learn from the wisdom of the community. G:
Adobe products are used around the world and are available in many languages. Please let us know if you have any problems or notes when dealing with languages other than English in the development of Adobe Sensei, especially the search function.

Mr. Prevost:
Adobe has been providing search capabilities in multiple languages for many years. In addition, there are many cases in which non-English-speaking users search using English words, and as a result, high-quality search results can be obtained. Under such circumstances, we have been working to refine the dictionary and deliver high-quality search functions to non-English-speaking users. And especially as a recent development, it has become possible to build multilingual models with deep learning and process them in natural language. In other words, it has become possible to translate using a multilingual model instead of using a dictionary.

G:
Every year, Adobe introduces a large number of highly complete features. Why can Adobe develop so many features so quickly?

Mr. Prevost:
We are doing so much to develop new features. And there is an infrastructure that enables a variety of experimental efforts. Another reason is that it is speeding up the time to go from the idea stage to the launch stage.

For example, in the case of Adobe Sensei, it is necessary to consider not only the building of the model, but also the interface and the final appearance on the screen. In other words, it is necessary to think not only about training a simple machine learning model, but also about how the interaction with the user will be. This process takes time, but we have a very powerful platform that allows researchers, engineers, and other members to work together to maximize their capabilities. increase. This allows us to announce many features each year at a very fast pace. The number of features in Adobe Sensei announced this year is higher than in previous years.

G:
Thank you for today.

You can see the new features of Adobe products such as Photoshop and Premiere Pro announced at Adobe Max in 2021 from the links below.

What are the details of the web version of Photoshop that makes Photoshop available in the browser? Summary of new features announced at the creators' festival 'Adobe MAX 2021' --GIGAZINE