It is possible that the fossil known as the 'four-legged snake' is actually another animal rather than a snake. by Dave Martill, University of Portsmouth

In 2015, research results were announced that the fossil excavated from the 110 million-year-old stratum in northeastern Brazil was the world's first 'four-legged snake' fossil, which attracted a great deal of attention. However, another research team that analyzed the fossil, named Tetrapodophis, claims that the fossil is not a four-legged snake, but a species of lizard-related

Full article: Tetrapodophis amplectus is not a snake: re-assessment of the osteology, phylogeny and functional morphology of an Early Cretaceous dolichosaurid lizard
https://www.tandfonline.com/doi/full/10.1080/14772019.2021.1983044

Research teams such as the University of Portsmouth, England, published a paper in 2015 that they discovered a fossil of a 'four-legged snake.' The fossil was excavated decades ago from a 110-million-year-old stratum in northeastern Brazil, led by Professor David Martil, co-author of the paper and professor of paleontology at the University of Portsmouth. I found it at a German museum I visited. The fossil had four legs with a length of about 1 cm on a body with a total length of about 20 cm, but the research team of Mr. Martil and others who thought that 'this is a snake' analyzed it with a microscope etc. We concluded that 'this is a four-legged snake' based on its characteristics. 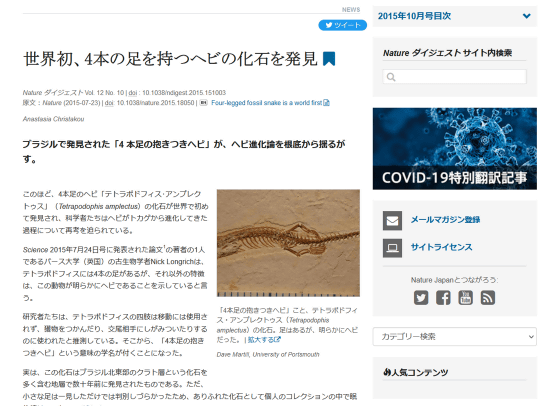 Named Tetrapodophilus, this animal is believed to be in the process of an ancient lizard losing its leg and evolving into a modern snake. Martil et al.'S research team estimates that the four short legs were not used to move, but to grab prey and mating partners. Although fossils of 'snakes with hind legs' have been discovered so far, only Tetrapodophis has been discovered as a four-legged snake.

However, in a new paper, a research team led by Michael Coldwell, a professor of biological sciences at the University of Alberta in Canada, claims that 'this fossil is not a four-legged snake.' The research team of Mr. Coldwell and others said that the specimens displayed in the Deutsches Museum were also analyzed under a microscope for 'what the 2015 research ignored'.

The fossils that are said to be tetrapodophilus are those in which one fossil 'contains most of the skull and forefoot and part of the ribs (A)' and 'almost most of the fossil except for the skull and right forefoot (A)'. It is divided into two parts, 'B)'. 'One of the things completely ignored by the original author is the other side of the skull,' Caldwell said, and the 2015 study found a crushed and shattered skull in 'A.' He pointed out that he did not pay attention to the 'skull type' that exists in 'B'. An analysis by Caldwell et al., Who focused not only on the skull but also on the opposite side, found that features such as jaw and tooth shapes were closer to lizards than snakes. Caldwell and colleagues also claim that the body of Tetrapodophis is more like a lizard than a snake. For example, the fossils of Tetrapodophis lack a vertebral stabilization system that helps snakes move around and have straight ribs that indicate they are aquatic rather than terrestrial.

From the above points, Caldwell et al. Are not a 'four-legged snake' but a kind of lizard-related species 'Dolichosaurus' that lived about 145 to 66 million years ago. Insisted that it was likely. Tiago Simonis, a co-author of this paper and a postdoctoral fellow at the Museum of Comparative Zoology at Harvard University, said that Doricosaurus is a species closely related to snakes, and the 2015 research team called Tetrapodophis a snake. He points out that it is no wonder that he thought.

On the other hand, some researchers still claim that Tetrapodophis is a 'four-legged snake.' Bruno Augusta, an associate researcher at the Museum of Zoology, Methodist University, USA, told Live Science, a scientific media, that Tetrapodophis is a wonderful fossil with a unique combination of features not found in other lizards and snakes. .. Regarding this research focusing on 'the type remaining on the other side of the fossil', it is said that it will not be a reliable source of information because the fossil does not actually remain. Martil, co-author of the 2015 paper, also told Live Science that he upheld the claim that Tetrapodophis was the most primitive snake.

In this paper, it is highly possible that the fossil of Tetrapodofis was illegally taken out of Brazil, and it is also stated that the Brazilian Federal Police have begun investigating this matter. Augusta, a researcher at the University of São Paulo, supported the return of fossils to Brazil, and I agree with the author that it is important for fossils to be returned to a public laboratory in Brazil. I will do it. '