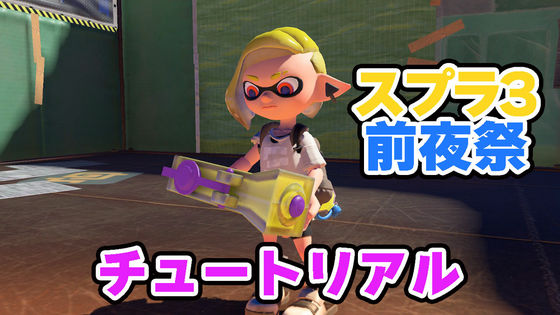 The “ Splatoon 3 Eve Festival ” will be held on August 28, 2022 from 9:00 to 21:00, where you can enjoy Splatoon 3 before its release through a festival reborn with new rules. 'Splatoon 3 Eve Festival' can be played by anyone who is a Nintendo Switch Online subscriber, and even before the festival starts, you can explore Bankara, the new home of the game, and post illustrations. Is possible. I tried playing the tutorial of 'Splatoon 3 Eve Festival' - YouTube


Gamers who have turned into RTAs competing to see how fast they can clear this tutorial have posted videos of how to clear the tutorial quickly. In addition, each RTA measures the time at different times. Some measure the time from the moment the character creation ends, while others measure the time from the moment the Inkling that the player controls appears. There is also However, the end timing of time measurement was the timing when the tutorial ended and the screen turned dark.

RTA that measures time from the moment the character creation ends.


This one is about 3 seconds faster.

This time is measured including the character creation part. Since it takes 30 to 31 seconds to create a character, the previous video has a slightly faster clear time.

This starts the time measurement from the moment the ink ring is displayed on the screen. It takes just 18 seconds to create a character, so this seems to be a little slower than '[Supra 3 Eve] Tutorial RTA in about 1 minute and 3 seconds'.

According to the tweet below, it seems that the tutorial will be cleared when the second line on the last bridge is crossed, so please be careful if you want to force quit the game and play the tutorial many times.

For those who are going to do a tutorial.
It seems that it will not be possible to test fire until the day of the 28th eve.
You can shoot ink and dive only during the tutorial. If you do it once, you can't do it anymore.
If you cross the second back line in the photo, the game will be forcibly terminated. #Splatoon3 # evepic.twitter.com/Y7HsYXQ8KX