The `` Splatoon 3 Eve Festival '' where you can experience Splatoon 3 before its release is being held for a limited time from 9:00 to 21:00 on August 28, 2022. I immediately participated in the eve so that I could experience the new buki and special weapons that appeared in Splatoon 3 in the actual battle.

How to participate in 'Splatoon 3 Eve Festival'? | Nintendo Switch | Nintendo


2: Buki & Sub Weapon
In 'Splatoon 3 Eve', you can use the new buki 'Stringer' and 'Wiper' in Splatoon 3, and the new sub weapon 'Line Marker'. You can see what kind of performance these new Buki & new sub weapons are by watching the following movie.


4: Action
New in Splatoon 3, 'Squid Roll' that allows you to jump while rolling by jumping while inputting the stick in the opposite direction during a squid dash, and if you press and hold the jump button while diving in the ink and release it Two actions called 'Ikanobori' to activate have been added.

In particular, Squid Roll is used to exchange and nullify enemy attacks, and many Splatoon players have released videos showing how they use Squid Roll.

Squid roll has been quite extreme pic.twitter.com/d5SfjxPE2X

It can be used even when climbing a wall, and it seems that it can be activated continuously because there is no deceleration after the squid roll.

Some even combined squid rolls with buki-specific actions. Combining it with a maneuver slide ......

Slide from squid roll is too much fun! pic.twitter.com/5ORuqgvUdI

You can now kick the wall with a squid roll, and the versatility of charge keeping is exploding ????

Regarding the effect of activating 'Ika Roll' and 'Ikanobori', Nintendo explains that 'the effect is to prevent the opponent's ink a little'.

In addition, there is a gear power called 'action enhancement' that makes it easier to perform squid rolls and squid rolls, and reduces the blurring of attacks immediately after jumping. By the way, among the gear that can be used at the eve, the main gear power that strengthens the action is attached to the power of the main gear. When it comes to shoes, it's only 'Beri Beri Sun Magenta'. 5: Lobby
Splatoon 3 looks like this. You can test fire in the lobby. Matchmaking can be applied by opening the lobby menu. 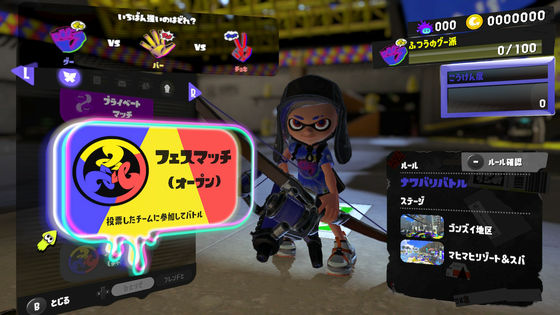 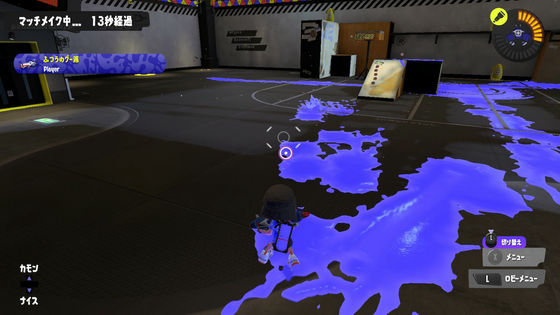 You can reset the fill of the test fire area from the lobby menu. 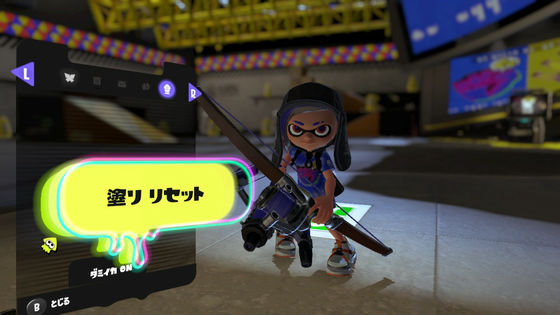 There is also a rice shop in the trial shooting area ...... It cannot be purchased at the eve. Also, Judge-kun was sleeping in one corner of the trial shooting area. 6: Festival match
What I felt when I actually played it was that the play skills of the players as a whole have improved, and it might be difficult for people who are playing Splatoon for the first time or who are returning to play for the first time in a long time at the eve of the festival. . I have the impression that the difference in play skills that always exists when joining a series midway is becoming more pronounced in Splatoon 3. Also, in the Splatoon series so far, I was worried that matchmaking often ended due to a communication error, which I don't remember much, and the match was forced to end due to the player leaving the match. In addition, the rules and new elements of the new festival are summarized in the following article, so if you want to participate in the eve from now on! Please check while downloading the special software.