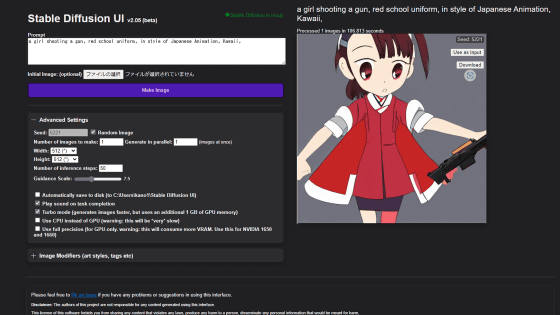 Stable Diffusion '' released to the public in August 2022 is designed to perform calculations with NVIDIA GPUs, and the required machine specs are high, so it is a little difficult to do in a local environment. But there is. The ' Stable Diffusion UI ' developed by programmer cmdr2 allows anyone to easily introduce Stable Diffusion into the local environment, and it is possible to use the CPU instead of the GPU for processing, so you can use a high-performance GPU. It is possible to generate images even on unloaded machines. 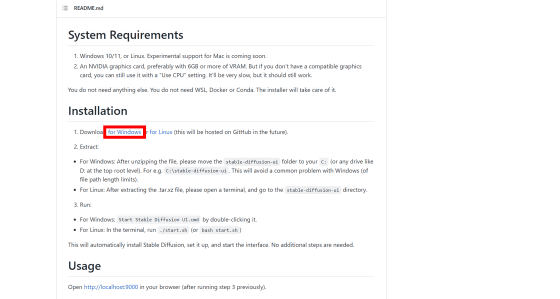 At the time of writing the article, Stable Diffusion UI has been uploaded to Google Drive in ZIP format. Click 'Download'. 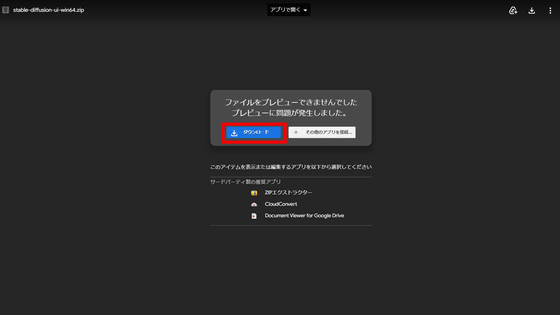 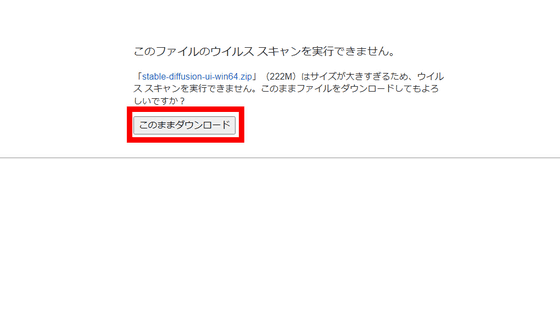 Unzip the downloaded 'stable-diffusion-ui.zip' with free software such as 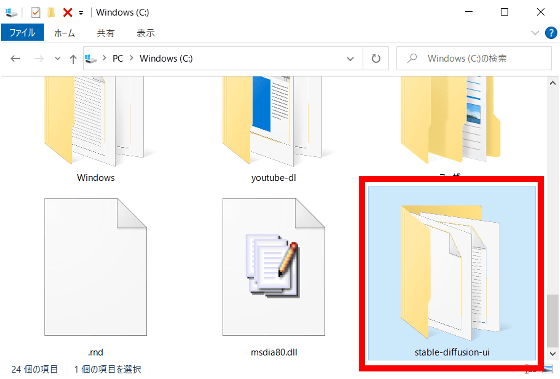 Double-click 'Start Stable Diffusion UI.cmd' in the folder to start it. 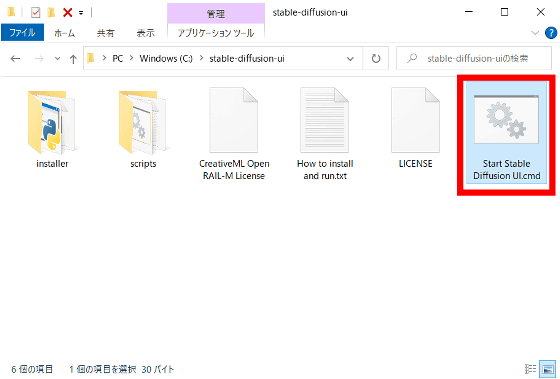 Command Prompt will be launched and various necessary tools will be installed automatically. However, this time it seems that the installation of the Stable Diffusion package failed at the end. 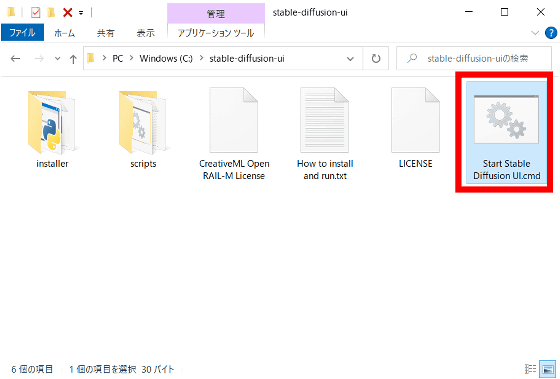 Then, this time I installed all the packages and succeeded in starting. The main browser is automatically launched, redirected to 'http://localhost:9000', and you can access the Stable Diffusion UI. In the initial state, it is set to use GPU, so click 'Advanced Settings' to set CPU generation setting. 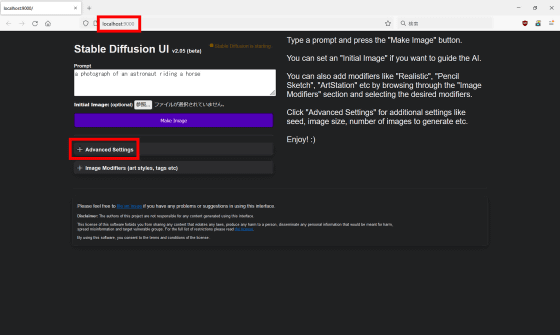 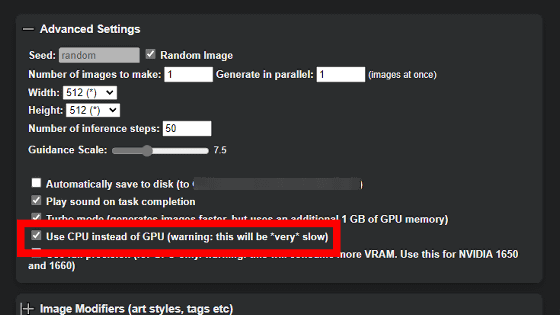 In 'Image Modifiers' under Advanced Settings, an example of an input string (prompt) that can be set when generating an image is displayed, so it is useful if you do not know what kind of prompt there is. 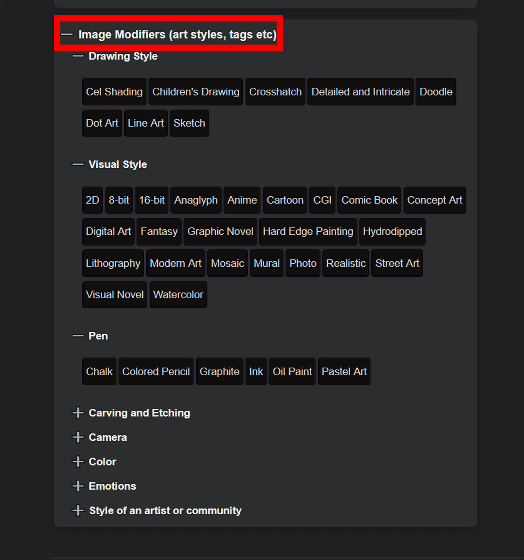 Confirm that 'Stable Diffusion is ready' is displayed in green at the top center. The prompt this time is 'a photograph of an astronaut riding a horse', which is entered by default, and click 'Make Image'. 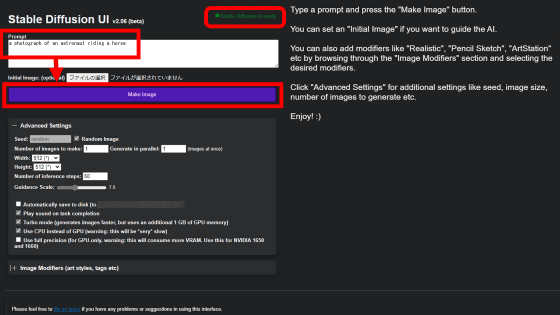 Then, 'Fetching' was displayed on the right side. 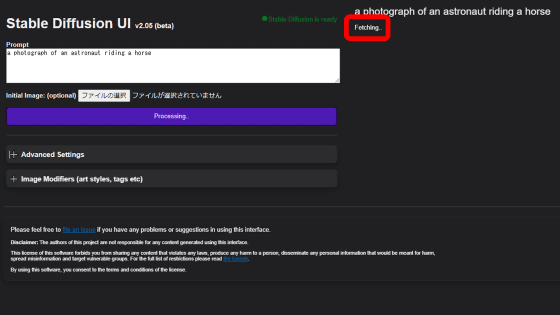 If you check the command prompt, you can see that the image is being generated, albeit quite slowly. 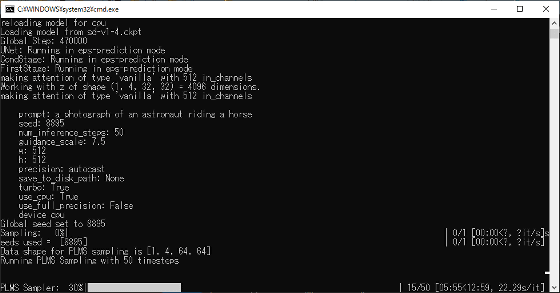 After waiting for a while, the image generated with the SE 'Chin' was displayed on the UI. In addition, when running on a slightly old PC with Windows 10 Pro, Ryzen 5 2600, RAM 16 GB, it took about 18 minutes and 30 seconds to generate one image.

This time, when I used the installed GeForce GTX 1060 (VRAM 6GB) to generate it, one image was generated in just about 40 seconds. You can save it at hand by clicking 'Downloads' in the upper right of the image. The version of Stable Diffusion UI is 2.05 at the time of article creation. Still, according to cmdr2, 'it's just a beta version'. In addition to preparing a troubleshooting page in case of installation or operation failure, it seems that questions are also accepted on Discord .