In recent years, high-precision image generation AI such as ' Stable Diffusion ' has appeared one after another, and some people think that 'AI may replace human artists.' Meanwhile, Andy Baio, who runs Waxy.org, a technology blog, points out that various illustration posting sites are moving to set guidelines for ``prohibition of posting AI-generated illustrations''.

As AI evolves to the point where it can generate highly accurate illustrations, the conflict between people who use AI and artists who are negative about AI is becoming more serious. On August 26, 2022, it was controversial that a painting generated by image generation AI Midjourney won over humans in the digital art category of the 150th Colorado State Fair. 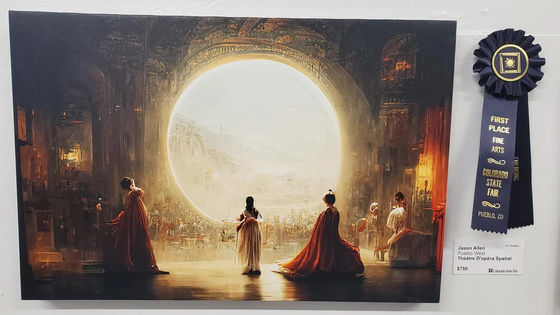 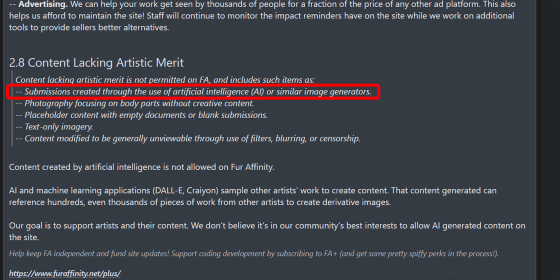 Fur Affinity explains its policy, 'Content created by artificial intelligence is prohibited by Fur Affinity. AI and machine learning applications (such as DALL E and Craiyon) sample the works of other artists We generate content, which can reference hundreds or thousands of other artists' work and create derivative images.Our goal is to help artists We do not believe it is in the best interests of our community to allow AI-generated content on our site.'

In addition, Fur Affinity created an ``account that automatically generates pornographic works for chemers using AI'' in July, and AI-made illustrations are posted at a frequency that reaches the upper limit of the upload speed limit. was occurring .

In addition, since 2021, Newgrounds , a long-established product posting site, has banned the posting of illustrations using ' Artbreeder ', which creates new images by synthesizing illustrations and face photos. The guidelines , updated in late August 2022, more explicitly refer to the use of AI.

Newgrounds guidelines have a section called 'AI Art', stating that 'AI-generated art is prohibited on the Art Portal. This includes the use of tools such as Midjourney, DALL-E, Craiyon, and includes websites such as Artbreeder, which selects two images and synthesizes a new image by machine learning.' On the other hand, Newgrounds says, ``Some AI usage is OK, such as when using AI-generated backgrounds mainly for character art. It is a policy to allow human artists to use AI in a supplementary manner, such as writing 'Please write'.

However, tracing or coloring AI-generated illustrations from above is prohibited as it is the same as tracing other people's illustrations. “The bottom line is that we want to focus on human-made art and not overwhelm the Art Portal with computer-generated art,” said Newgrounds.

In addition, the new illustration posting site Inkblot , which was funded by the crowdfunding site Kickstarter in 2021, has indicated a policy of not accepting AI art.

Hi, we mentioned a few days ago that we have a no tolerance for AI art & working on updating our ToS in coming day for this which you can see in tweet here: https://t.co/5NCCKDYVWv

Illustration posting sites that have not yet indicated a policy for AI art have received complaints from users. In DeviantArt , an art community established in 2000, a user reported that ``10 out of 25 illustrations displayed on the top page are made by AI,'' and users reported that AI-made illustrations I'm discussing it in a thread asking for regulation.

@DeviantArt You were kind of the last art site dedicated to art, but everyday I check the site now more and more its Ai. 10 out of 25 on your front page is Ai gen images. I guess this actually might be the end of a lot of art sites? I hope someone steps in and makes a new site pic.twitter.com/1Kez5FFQQF

ArtStation , a major illustration posting site, has not expressed its stance on AI-made illustrations at the time of article creation, and many illustrations generated by AI have been posted. ArtStation is also used for `` Prompts for generating beautiful images with Stable Diffusion ' ', so in the future, `` AI will generate new illustrations based on illustrations posted to ArtStation. Baio points out that an Ouroboros-like state may occur.

“Regardless of how you feel about the ethics of AI art, the online art community faces a very real problem,” Baio said. If you have a powerful GPU, you can generate thousands of images an hour while you sleep.” If AI art is posted unlimitedly on illustration posting sites, it may be difficult to even find illustrations drawn by humans. ``Community administrators and moderators must decide whether to allow AI art, separate it, or ban it entirely to keep the community alive,'' Baio said.

As AI art spreads, copyright issues will emerge, but as of February 2022, the United States Copyright Office has decided that ``the work created by AI has no copyright.'' However, this conclusion was based on the fact that there was little human intervention in the illustrations at issue, and it was judged that ``there are no human copyright elements.'' is considered to be acceptable. Also, if another AI art is discussed again, the authorities may make another decision.

``There is no copyright in the work of art created by AI,'' the US Copyright Office rejects AI's copyright-GIGAZINE