A super huge cow sunfish weighing about 3 tons was pulled up and updated the Guinness record, the hugeness greatly exceeding the previous Japanese record It was confirmed that the giant sunfish weighing 2744 kg found in 2021 greatly exceeded the record of the Japanese sunfish, which was the largest known until then, and updated the Guinness record as the `` largest bony fish ''. Did.

The 2744kg cattle sunfish that broke the current Guinness World Record goes to new heights as the king of bony fishes! [Lab BRAINS] - AS ONE
https://lab-brains.as-1.co.jp/serialization/scientist-column/2022/10/30849/

On December 9, 2021, a sunfish was found floating dead off the island of Faial in the Portuguese Azores in the North Atlantic. In a paper published on October 11, 2022, researchers who conducted autopsies and DNA tests said that this sunfish was a type of sunfish, with a total length of 325 cm, a total height of 359 cm, and a weight of 2744 kg. announced.

The Guinness World Record for the heaviest bony fish so far is the 2300kg record of the sunfish found off the coast of Kamogawa, Chiba Prefecture, Japan in 1996, so the individual found this time is 444kg. It will be that it was huge even more than.

According to Etsuro Sawai , one of the co-authors of the paper and also known as 'Dr. Sunfish,' the sunfish was in Portuguese, even though it was in the news that a giant sunfish weighing 2.7 tons was found in Portugal. Therefore, it was not spread all over the world. Therefore, Mr. Sawai contacted the researchers who responded to the news coverage and recommended that they write a paper, and this record was published as a paper and confirmed again that it was a world record.

You can see how the giant sunfish weighing 2744 kg is pulled up from the following movie.


This sunfish was found floating dead. 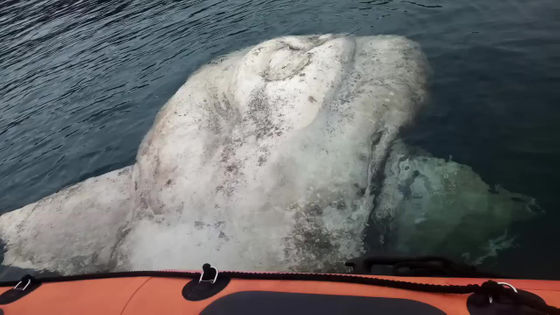 It was lifted and measured by a forklift, and it was confirmed that the weight was 2744 kg. You can also see a black dent on the head. 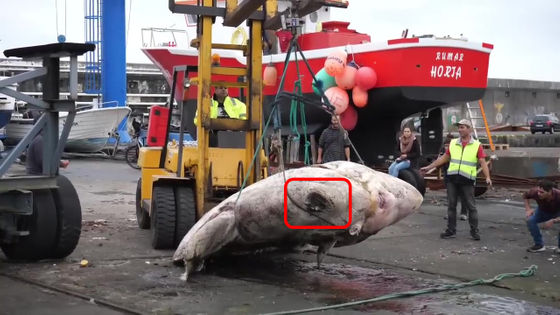 This dented part had a color that seems to be the paint of the ship, so it is considered to be the damage caused by the collision with the ship. However, it is unknown if this contributed to his death or if he was hit by a ship after he died. There was no noticeable damage other than this dent.

Mr. Sawai, who was the person who registered Japan's sunfish in the Guinness Book of Records and was also involved in updating the record, reported on Twitter that it was ``Chiba Prefecture people's tragic news.''

New paper ( https://t.co/9EBke8nP4l ) & commentary release!
Sad breaking news for Chiba citizens ???? World's heaviest bony fish update!
A giant sunfish weighing 2,744 kg, exceeding the current Guinness World Record, has been captured off the coast of the Azores!
As a result, the 2,300 kg individual in Kamogawa, Chiba Prefecture was demoted to the second largest in the world. https://t.co/MoXQZK6pef