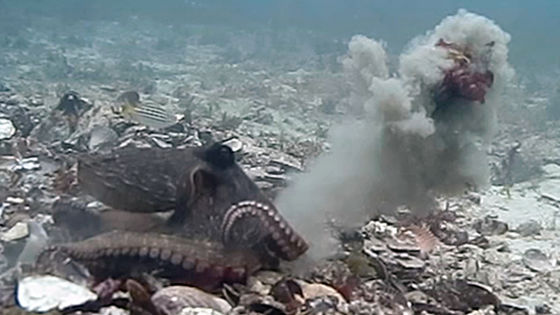 Many people have memories of playing catch with their family and friends when they were children. A recent study has captured footage for the first time of octopuses throwing shells and clumps of mud at other octopuses as social communication, whether or not they are playing.

In the line of fire: Debris throwing by wild octopuses | PLOS ONE

Octopuses caught on video throwing silt and shells around themselves and at each other
https://phys.org/news/2022-11-octopuses-caught-video-silt-shells.html

Only dexterous animals can throw objects, so it is a rare behavior that can only be seen in a handful of animals other than humans, such as some primates and elephants. In a paper published in the peer-reviewed scientific journal PLOS ONE on November 9, 2022, a research team led by Peter Godfrey-Smith at the University of Sydney in Australia found that octopuses throw objects at other octopuses. I announced that I succeeded in shooting for the first time.

You can see how the octopus is throwing mud and shells from the following.


Two Sydney Octopus (Octopus tetricus) face each other on the ocean floor. Now you can see the shell under your lifted arm. An octopus threw a few seashells. 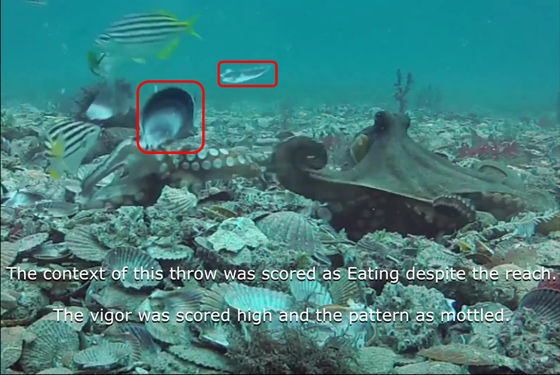 When throwing, an octopus grabs a shell with the base of its arm, then blows out a jet of water from an organ called a funnel , and throws the object with that momentum. Funnels are also used by octopuses to swim in the water, but when throwing an object they have to move their arms in a different way than usual, so this video shows that ``shells and mud may have been accidentally blown away. The research team speculates that it is a record of intentional throwing behavior. In this study, Godfrey-Smith and colleagues photographed Sydney Octopus (Octopus tetricus) living in Jervis Bay in southeastern Australia from 2015 to 2016 with an underwater camera. As a result, about 10 octopuses were confirmed to throw shells, mud, seaweed, etc. a total of 102 times.

Some of them seemed to simply throw away leftover food, but most of the throwing was done when other octopuses were around. Throwing was seen in both males and females, but 66% was by females. Also, about half of the throws occurred during, before, or after interactions with other octopuses, such as when the octopus was intertwining its arms or trying to mate, and about 17% hit.

The octopus can change its body color, and when it becomes aggressive, the body becomes darker, but the darker the body, the stronger the throwing action, and the higher the hit rate. In addition, it was observed that the side where the object was thrown also showed some kind of reaction to the thrown object by bending down and extending the arm in the direction of the thrown object. On the other hand, there was no case of throwing back an object and fighting back, and there was no fighting between octopuses due to being thrown.

The research team also reports that some of the throws were aimed at the underwater camera, and that throws aimed at the camera were especially common when the camera was accidentally moved too close to the burrow.

'This paper opens up new avenues for investigating the social lives of notoriously intelligent animals,' Tamar Gatnik of the University of Naples, who was not directly involved in the study, told the scientific journal Nature. This interaction between octopus individuals can be said to be communication in a sense.'