Research results that unknown ``another mass extinction'' occurred on the earth The Earth has experienced five major mass extinctions, beginning with the Ordovician period about 443 million years ago, and continuing through the Devonian, Permian, Triassic, and Cretaceous periods about 66 million years ago. All of these events occurred during the 'age of life visible to the naked eye,' and are collectively called the '

Big Five .' It is claimed that there may have been another event that was unknown until now. 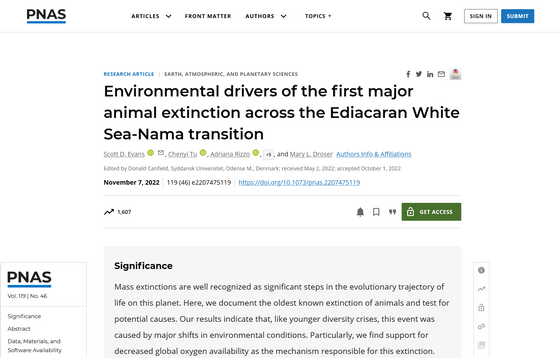 Earth might be experiencing 7th mass extinction, not 6th | News

In 2022, researchers at the University of California, Riverside, and Virginia Tech announced that an extinction event on par with existing extinction events occurred during the Ediacaran period, 550 million years ago. The Ediacaran is thought to have been home to the first complex multicellular organisms on Earth, but due to some factor, about 80% of all organisms have been lost.

Unlike the subsequent extinctions, the Ediacaran extinction was difficult to investigate because the organisms that lived there had soft bodies that did not remain well in fossils. Therefore, researchers investigated the enormous evidence found so far and confirmed the environment of the Ediacaran period, the size of the animal's body, diet, mobility, and habits. As a result, it turns out that the oceans around the world lost a large amount of oxygen during the Ediacaran period. This is thought to be the cause of extinction, and the few surviving species seem to have had bodies adapted to low oxygen environments.

'The impacts of climate change on ecosystems are clear, and we will be mindful of their devastating impacts as we plan for the future,' said Philip Vaughn, a geologist at the University of California, Riverside and co-author of the study. I have to,” he said.